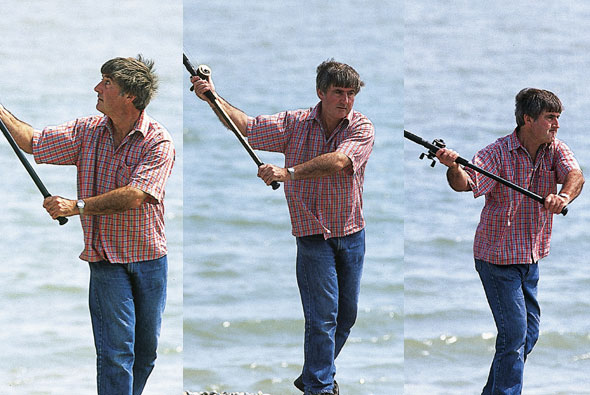 Smacking the lead sinker like you hate it is no way to gain fishing casting distance, says coach John Holden, who underlines the fact that a whole basketful of facts lead to that sweet cast that sees the lead sinker heading out to sea in a graceful arc

There are three areas to work on in order to extract maximum power from a pendulum cast, body coil, arm action and sinker arc. It is the correct balance and blend of these elements that shapes the overall style and determines how well it works.

No two casters are identical in technique, though all of the good ones follow a general theme. Advanced casts – of which pendulum is just one option – are highly individual so you will not find a blueprint for your own personal style in a casting textbook.

You must develop it yourself or, better still, with the help of a casting coach. If you choose the coaching route, pick a man with a good track record. Nobody teaches successfully at this level unless they can cast well themselves.

There are plenty of coaches who can talk the talk. But in this case you must have somebody who can properly demonstrate the techniques.

Remember that as any big cast develops, it always becomes a balancing act between power and control. Power is what most anglers concentrate upon because they think it is the secret. Most casters who fail to perform as well as they would like to, have power to spare. What they lack is the ability to control that power. Thrashing gets you nowhere until your technique is picture perfect, and even then it makes very little difference. On the other hand, that little bit of difference could just be enough to set a new record.

The big defects in pendulum casting are incorrect body wind-up, poor sinker swing and failure to achieve a solid launch point. Looking back at the fishing version of the cast, you may think that this sounds familiar. You are right. The mistakes that ruin the smaller cast will do the same to an advanced style but they’ll do it big time.

The advanced pendulum technique is simple in principle. Wind up your body and take your arms around as far as they will comfortably stretch. Make a big swing on a long drop. Unwind smoothly and at the same time guide the rod down and around so that you arrive at launch point. Then just hit it right through. The key to success is a solid launch point; otherwise, most of the effort is wasted and all the problems appear.

The wind-up for a full pendulum swing needs be little more than you use for fishing. Provided that you wind up properly, there will be plenty of torque available to drive a lead weight well in excess of 200 yards.

How far you can wind up is another of those personal issues that shape a style. Abigger rotation has obvious mechanical advantages but also suffers a downside. By over-winding it is all too easy to lose that vital coil-spring effect.

Recall the sequence we used in the early exercises: stance, weight transfer, and the feeling of the shoulders turning while the hips resist the movement. That is what generates power.

Over-turning begins with a poor stance – usually too close to the line of cast – and ends with the hips following the shoulders rather than planting themselves solidly. This is a low torque setup with no chance of driving a big cast.

The second drawback is that because your stance is too closed, the cast begins to lock up when it should be freewheeling through launch point and into the final hammering action.

The only way to gain a great deal of extra rod arc without losing the spring-like effect is to introduce a step into the cast. The caster sets up with his back to the target so that he can take the rod around through a full 270 degrees.

He makes the pendulum swing. As the sinker comes down and the power stroke begins, he steps around and forward so that his hips twist ahead of his shoulders to produce the necessary body torque. The cast finishes with the usual drive through to launch point and beyond.

This is demanding, high-octane stuff, even for tournament casting, and it’s definitely not for beach fishing.

In the fishing cast, the arms hold the rod in front of the chest as the swing takes place. The right arm must not lift upward and backward to make the inswing. The left hand does the work so that the right hand stays on plane as it unwinds.

We break both these rules in big-swing pendulum casting. Think of it as deliberately disconnecting the arm action from the body action. In other words, the arms and the rod go well to the right of the chest even though the body wind-up is much the same as in the fishing version.

Set up for the fishing cast then increase the rod arc by taking your arms as far around to the right as feels comfortable. Lift the rod a few inches until the right hand is between shoulder and head height.

Make the outswing in the same fashion as before by pushing the right hand out and slightly down. The swing angle as seen from above will obviously be greater than in the fishing cast which aims the out-swing somewhere toward seven o’clock on the casting clock face. The big swing is more toward nine o’clock.

If 270 degrees feels natural and does not destroy your body coil, that’s fine. Otherwise stay within your comfort zone which for most anglers lies between eight o’clock and 8:30pm.

The sinker peaks on its out-swing exactly as in the fishing cast. The inswing is produced by a combined push out with the left hand and a smooth pull in-and-up with the right. The right hand goes back to its starting position or may even drift a little farther back behind your head.

The sinker peaks on the inswing, also as before. You feel the pause and your body says, “Go.” The body unwinds and the right hand comes down and around, the arms moving slightly quicker than the body (which they will do naturally if you allow them to).

This way, the arms and body arrive together at launch point, with the right hand – and thus the rod as well – exactly on plane. This launch point, or heavy hammering position, is common to all casts – the big and small pendulums, the South African, the Easy Cast. In fact, all forward facing styles.

Then you hit through to the target with the familiar hammering action. Even more so than the fishing version, a big pendulum should feel SLOW. 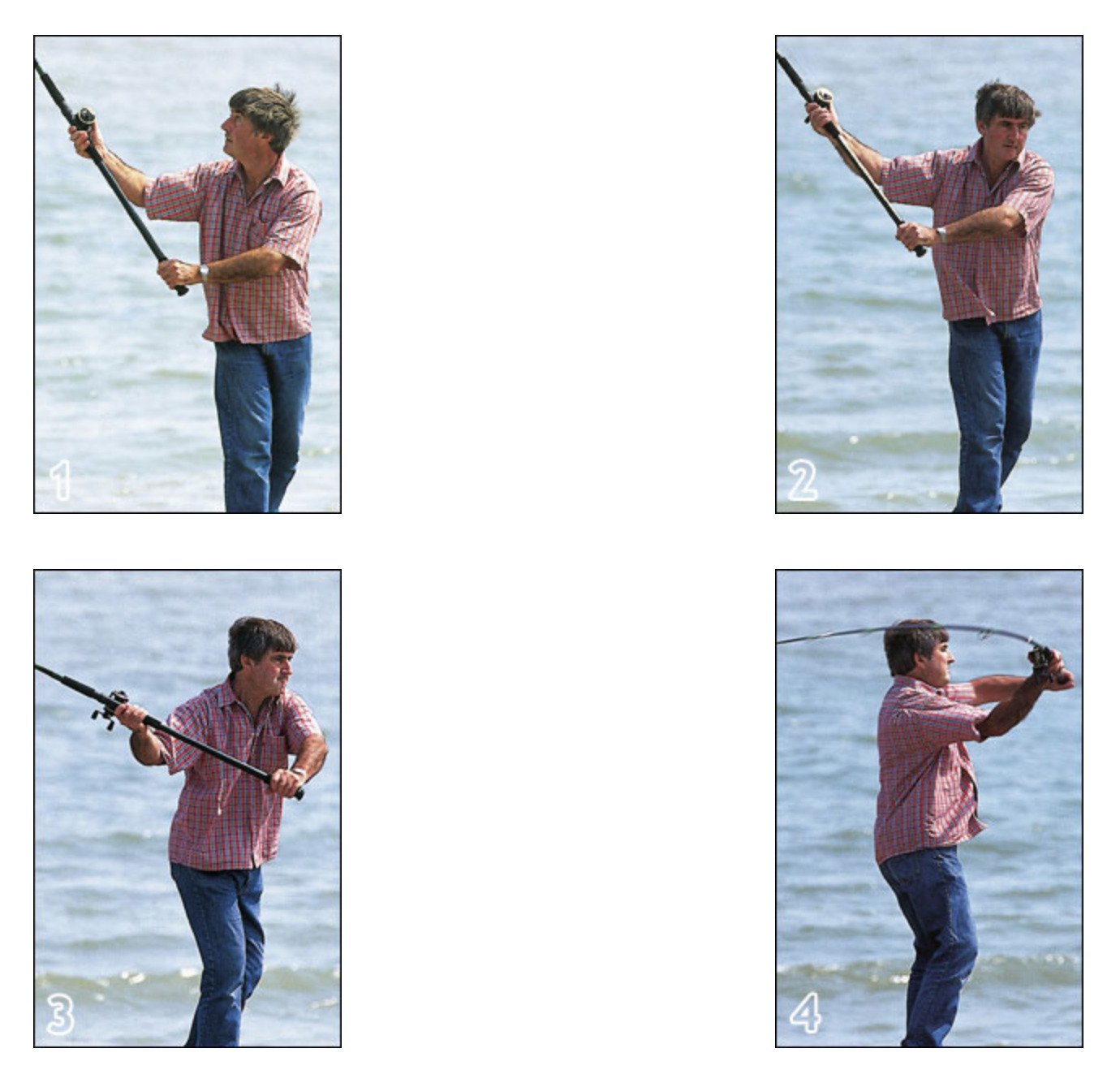 The big swing for beach fishing is an extension of the abbreviated pendulum style we looked at earlier in the series. There are only two changes to think about. The body wind up (pic 1) is a little more than before, but the arms and rod are set up much farther around to the right (as the caster sees it). I make the outswing then the inswing which takes the sinker high to the inside behind my head, allowing the right hand to drift back and upward a little (pic 2). When the cast begins (pic 3) my body unwinds as my arms drop the rod on to the correct plane, which automatically brings the entire system to launch point (pic 4). Notice how compressed the rod is at launch point. The cast ends with the usual hammering action and followthrough (pics 5 and 6).

The fishing cast’s swing does little more than aerialise the sinker, so that when the main cast begins the sinker falls from the top of the in-swing to a position inside and behind the rod tip arc. As the rod accelerates, the sinker and leader are drawn smoothly into proper alignment, ready for launch point.

The big pendulum swing does much the same thing but over a far longer path, which allows time and space for extra power to be generated. The outcome is that caster, rod, leader and sinker arrive at launch point not only in precise alignment but with the sinker moving fast and the rod blank already quite heavily compressed. Owing to this greater speed and stored energy, the cast feels that much ‘tighter’ as it approaches launch point.

Feedback is better so that you can really sense what’s going on. Timing is not only less critical but tends to be self-correcting as well. You can hit through really hard without much risk of a backlash even with a quick reel.

The key to this happy state of affairs lies in the cast’s setup. At the moment the power stroke begins, the sinker must be in a position that allows it to come around on the right arc. If not, it will fight the rod and the caster all the way.

This is why you must experiment with body coil, arm position, swing angle and leader drop to find a combination that feels good and gets the sinker to the correct spot at the top of the in-swing. Rod length, blank action, sinker weight and other variables come into the equation. It is not an easy state to achieve, and I will not pretend otherwise.

Big swing casting demands intelligent practice and months of hard work. The only shortcut is proper coaching, but even this isn’t a five-minute exercise. In this article I have given you the bare bones of the system.

Later we shall look at variations on the theme, such as arm and body dominance, flat and steep angles, and whether the sinker should hover at the peak of the inswing or go right over the top.

These are all-important issues at the higher levels but they are not critical during the learning stage. Think of the big swing as an extension of the fishing style and you won’t go far wrong. The simple casts and the monster tournament field swings are the extremes of a range of options. You can choose how far to take it.

From the fishing point of view, the middle ground certainly makes sense. A moderately extended setup and swing will generate 200-yard-plus power with relative ease but without making massive demands on caster or tackle.

Dry-run practice. Here’s an excellent no-sinker drill to help you feel the big swing action. Wind up (pic 1), shut your eyes and make an imaginary swing. Feel how your right hand naturally drifts back and up on the inswing. Unwind in slow motion, dropping the rod on to the proper plane (pic 2). Feel yourself arrive at the familiar launch point (pic 3). A proper cast looks slightly different but don’t worry about that. Get the feeling right and the technicalities will take care of themselves.