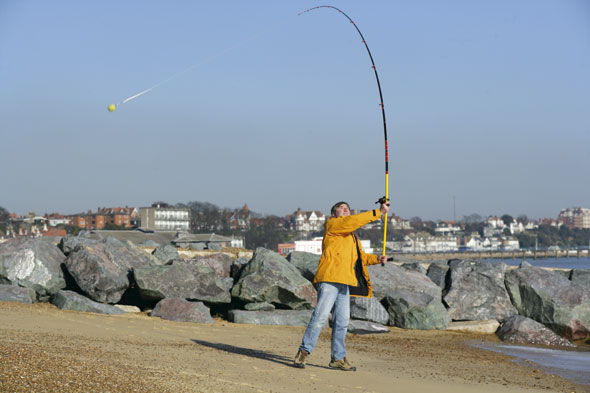 You can’t catch sea fish unless you can beach cast properly. But you don’t have to use gut-busting sea fishing tackle, be built like a man-mountain or use space-age tackle. In this new belt and braces series, John Holden explains why simplest is best and 150 yards with a baited hook isn’t beyond the skills of most beach anglers. Go on, give it a go. You know it makes sense!

This series is all about discovering easy ways to master the key steps in successful casting. It is not about high performance casting techniques and specialist equipment. Can I hear sighs of relief? On the other hand, even the little off-ground cast we start with is easily capable of throwing baits more than 150 yards. In other words, distance is not really an issue.

Get the basics right and you should be confident of casting plenty far enough, smoothly and effortlessly, to catch fish from many shore marks, most of the time.

Rather than discussing casting theory and tackle choice, I have boiled down the techniques to a handful of key steps. These will extract great results from a wide range of tackle, from budget rods and fixed-spool reels to top-end beachcasters and CT reels.

Avoid rods clearly beyond your current ability, which means being sensible about length and stiffness. Use a 5oz or 150g sinkers, which has proven to be the optimum lead for beach fishing.

Other than the common-sense issues of suitable shockleader, a metal clip to connect the lead weight and safe knots throughout, there is nothing more to add.

The most important step in casting is to build solid foundations. That is most easily achieved with a ground cast based on limited body rotation and modest rod and sinker angles. No other style is simpler or more predictable.

And to the benefit of raw beginner and experienced angler alike, every important step can be pre-set, so that the casting action itself becomes almost automatic. Fishing is more enjoyable when casting takes care of itself.

This ground casting style is known as the Easy Cast or Brighton style. The lead weight and shockleader are laid on the ground somewhere under the rod tip rather than extended away as in other ground casting methods.

It’s a highly efficient cast even though it is compact. Its strength – or secret if you like – is that it guarantees to get your rod tip bending early in the casting action.

Be in no doubt that the Easy Cast is an excellent and practical fishing method in its own right. Despite the simplicity, it is definitely far more than a practice exercise.

This little off-grounder is in a class of its own for learning the key steps found in all the more advanced casts, such as the pendulum, and it is often the only style that some fishermen may ever need.

● Pick a spot in the sky where you want the sinker to go, then take up a natural stance relative to that target.

● Check the sinker drop and prepare the reel.

● Turn away from the water, lay out the sinker and set the rod position.

● Turn back to the sea and focus on the mid-air target.

● Feel the compression building in the rod.

● Flick the rod over with a fi rm hammer action.

● Hold the follow through until the rig hits the water. 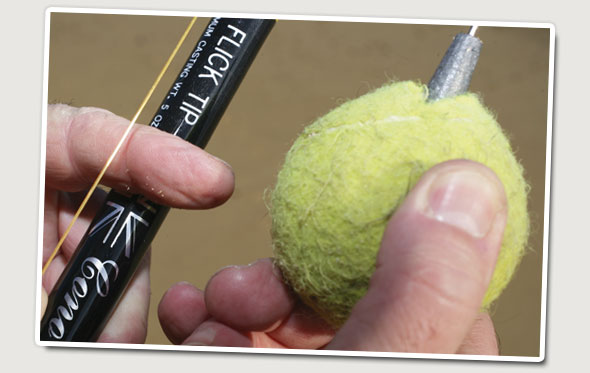 The length of shockleader outside the rod tip when the tackle is set up ready to cast is called the drop. Drop is not critical on the majority of beach rods casting about 5oz of lead, but half the rod length is a good starting point. It is important to use the same length of drop each time. Measure the drop against a reference point on the rod blank.

Rushing the start of the cast is a common problem. If it affects you badly, try pushing the lead weight into an old tennis ball. The extra weight and bulk encourages a smooth, steady action. A ball is easier to retrieve if you’re practising on grass. 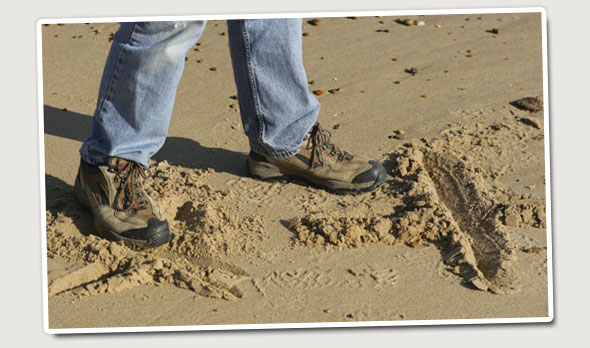 Proper stance is vital to successful casting and there’s no magic involved. The final stage of the cast is to punch the rig towards an imaginary target high in the air. The action is a simple push-and-pull with the arms, exactly the same as swinging a big hammer.

Have a couple of practice swings before making a cast. Aim at an aerial target and you’ll find that the stance takes care of itself. Your feet will settle in exactly the right place. As in most aspects of casting, what feels right generally is right. 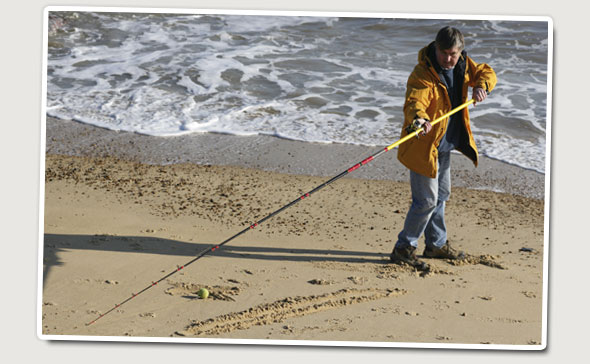 I cannot over-emphasise the importance of cast-to-cast consistency. Your actions are bound to vary at first, but the set-up itself can be pre-set. How the cast is set up largely determines whether or not it will be successful.

Sinker drop, stance, rod angle and the point on the beach where the sinker is laid must be consistent unless you choose to alter them. Even then it is best to make only one change at a time. If it helps, mark your feet, rod and sinker positions in the sand. In time you will be able to set up the cast by feel alone. 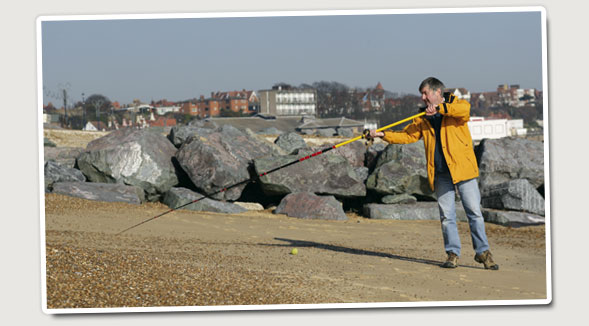 Look out to sea and visualise a target at about 40 degrees elevation and just to the right of where you want the rig to land. Settle your feet in position relative to the target, check the leader drop, set the reel for casting. Now turn away from the water and drop the weight on to the beach on an inside layout just to the right of the rod.

Don’t use too much body rotation and there is no need to take the rod too far around. Now run through three checks: The rod tip should be low to the ground, left elbow held fairly high and, importantly, create a mental picture of where that target is in the sky behind you. 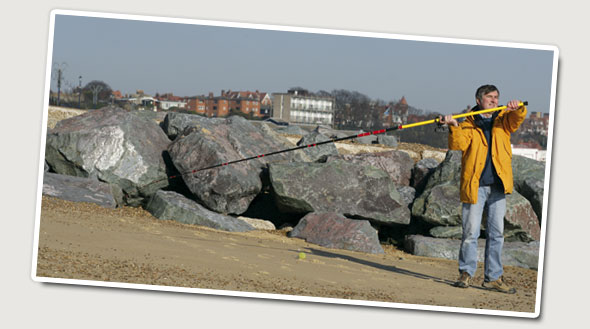 The casting action, which everyone new to the game automatically assumes to be the difficult part, is nothing more than a natural reaction to all the preparations you have made. 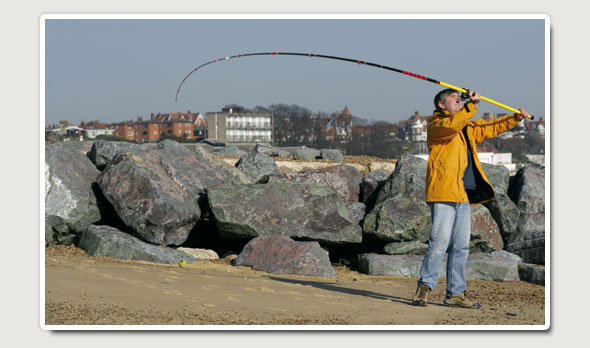 Although your arms and the rod have done very little, the rod tip has begun to compress against the lead. You feel some resistance and, if you rush, it may be enough to catch you out. That’s why the action must start slowly and smoothly.

By the time your body has unwound from the set-up position and your shoulders have almost turned to face the sea, the rod will feel surprisingly tense and heavy. The rod is loaded with energy and almost ready to fire the tackle. Concentrate on that target in the air. Feel the resistance of the rod. Automatically and at exactly the right moment, your arms will start to push and pull to flick the rod tip over. 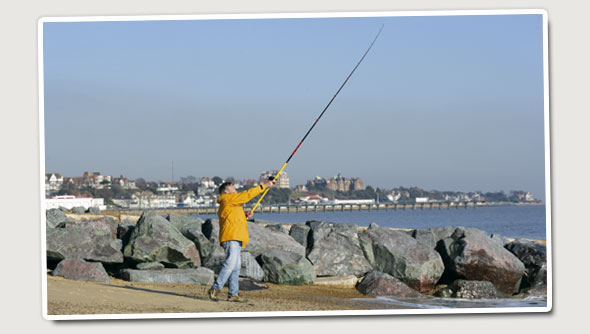 There is no need to consciously time the arm action or to control it. Just let it happen. The feeling should be just as if you were swinging a heavy hammer. This may seem far too simple, but that’s the way it is.

Good casting is simple and the actions are all natural. Releasing the reel is automatic as well. For the vast majority of anglers it just happens at precisely the right time regardless of whether they use a fixed-spool or a multiplier reel.

This simple casting style easily throws a bait more than 100 yards. With practice, 150yd is well within its scope using the basic layout.

Extending body rotation, rod angle and sinker layout boost the potential towards 200yd for the caster who opts to make the Easy Cast his main style. Be in no doubt that this is a very powerful style. Don’t let the simplicity fool you.

There are limitations, some of which make ground casts of any kind unsuitable. The most serious drawbacks are lack of rod tip clearance and no clean lift-off point for the weight.

Rocks, weeds and swirling surf are obviously far from ideal spots for ground casting. Annoyingly, clipped down rigs can be difficult to use because the hooks unclip when the tackle is laid out and the shockleader slackens momentarily.

At this point the pendulum style may seem an attractive proposition. But what if you don’t have the time to learn it, don’t have suitable tackle or don’t fancy the idea of making a big swing anyway?

An attractive solution might be to stick with the Easy Cast’s simple, fluid action, but clean up the beginning of the cast so that the rig hovers in mid-air rather than lies on the beach.