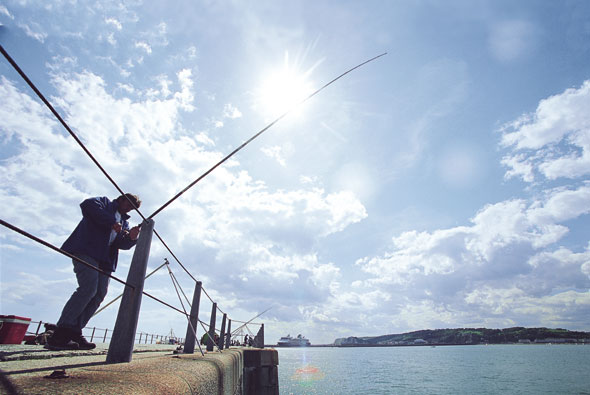 Have you ever wondered why some anglers always seem to be in the right place at the right time and always catch all the fish? Here’s an insight on when and where to fish. Follow the advice and you could be a winner…

For the sea angler the two most important factors to consider when selecting a venue and time to fish are the weather and the tide. Despite this many regular anglers pay more attention to their comfort when choosing fishing times and venues, so it’s small wonder some find success difficult to catch.

In the past when fish were more plentiful the casual approach occasionally produced fish, but even then it was more important to fish at the right time in the correct place. So next time you are selecting a day or night to fish, ask yourself three simple questions – are the fish are likely to be present? Am I picking a suitable tide? Is the weather suitable for the venue?

IF you have ever watched the sea while you are fishing you will appreciate its immense power. Waves and swell travel over the oceans, and they are echoes of the weather, boat traffic and movement of the sea sometimes transferred across thousands of miles.

In most cases the wind and weather on the day dictate the wave and swell size, but on coasts facing large oceans, for example the Atlantic coast of the UK and Ireland, the swell is often the result of sea movement thousands of miles away, often days or even weeks before. This brings the added danger of the odd series of rogue waves. There is a saying that when fishing from Atlantic coasts you should beware of every seventh wave because it’s a big one.

Waves and swell have a far more dramatic effect on the sea angler’s results than many realise because they determine the marine environment and the fish which are dependant of both the sea’s predictable and unpredictable movements. Wind direction and speed linked with the state of the tide controls much of what goes on below the surface.

A heavy surf or swell threatens the hold marine animals have on their various habitats. A swell can gouge a complete colony of shellfish or marine worms from the sand and dash them into the surf. A heavy breaker can scatter and crush rock dwelling shellfish, crabs, shrimps and small fish.

During the spring tides the water not only comes into the highest point, but it ebbs to the lowest point. Therefore a storm coinciding with a spring tide at low water will expose virgin areas of the shoreline to the extreme weather and this always leads to the most devastation of marine life. The fish know when conditions favour such a free food source and are aware of the required wind direction, tide and power of the waves required. Instinct tells them where and when to make the most of nature’s bounty.

WHY THE FISH MOVE INSHORE

ON many shore venues the fish are totally absent at certain states of the tide, often at low or slack tide or when it is dead calm. The sea is vast and packed with food, why would fish want to visit a shallow, static shoreline? They will only come close to shore when conditions are favourable for food and that includes rough weather, strong tides and at night.

Fish use the power of the tide to travel to feed and they are most active when the tide is strong, while the small marine lifeforms on which the fish feed are also more exposed and vulnerable to predators when the tide is strong or weather driven. Fish arrive with the flood tide and return with the ebb or vice versa. They do this by instinct and it means that certain species pass through a venue at a regular state of tide. Such hot times for fishing are known to some anglers who fish only when fish numbers peak on a venue.

However, on some venues the spring tides are too strong for the angler to be able to fish safely or efficiently. On other venues the neap tides offer better access and safer fishing. Such local knowledge is invaluable to the angler, but it can only be learned with experience. Confused? It’s easy to get confused because different venues fish differently in terms of weather and tide. However, most produce consist¬ently during a rigid set of favourable circumstances and it’s these you need to learn.

The first rule when selecting a venue to fish is to look for an onshore wind, the aftermath of a gale is an obvious favourite.

While a light surf may not be sufficient to kill or maim marine life so that it becomes vulnerable or available to the fish, in many cases marine ani¬mals that have been killed and buried by a previous storm are unearthed or exposed by a light swell and the fish know this. That’s why old smelly baits often work and why any onshore wind on a venue can be so productive.

Rule number two when looking for a venue concerns the colour of the water. A strong swell or surf will also colour the water and this will provide cover for fish in daylight. When the sea is clear many species will not venture inshore because of the sunlight, which pen¬etrates the water. Similarly clear water is often the best time to fish at night because the fish only visit a shoreline to feed during one tide (darkness) in every 24 hours.

LOOK at any section of the coast and it will have hot spots and fishless spots. Learning these is an important aspect of seasonal and local knowledge. Not all of the sea has fish in it all of the time, but wasting time fishing when and where there are no fish is what a lot of anglers do.

Certain species, such as bass and flounders, will visit the shallows and just love surf and swell. Other species avoid the shallows. For instance, cod are never caught inside the surf and tend to patrol out past it. A few spe¬cies, such as mackerel, wrasse and plaice, prefer clear, calm seas. Others, like whiting, dogfish, dabs and cod, prefer rough and coloured water.

These are simple facts, but essential learning. You don’t go feathering for mackerel or spinning for bass when the sea is chocolate brown. Equally, you don’t fish for cod from a shallow sandy beach when the sun is shining and the water is like gin.

● Tide tables are always printed for a precise port or venue and require a constant to determine the high and low tide times of other nearby places. You add or subtract the constant from the given tide time to determine the tide on your selected venue. During summer you need to ensure that you add an hour for British Summer Time. (BST)

● When fishing in a surf, even comparatively small surf, always remember that the wave action dislodges food on the land side of the largest wave and this will be pushed inshore by successive waves. The third flat section inside a wave is the hot spot on many surf beaches.

● Some surf anglers watch for patches of brown water where waves are moving the sand and this is where fish are more likely to be hunting for food. It’s not an exact science but is worth observing.

● A heavy surf pounding against a pier or promenade can often deter fish. Some venues are notorious for being poor in rough weather over the high tide.